If you are looking for a a private villa in Matagorda, Lanzarote for a self catering holiday then Villa Rosa is ideally placed for you.  Located in Matagorda at the north eastern end of Puerto del Carmen we are a short walk from a top class selection of bars, shops and restaurants and an excellent fine sandy beach, yet the busier areas of central Puerto del Carmen are just 4km down the road.  Lanzarote is a beautiful and extraordinary island with its unusual volcanic landscape, white painted low-rise buildings and sun-drenched sandy beaches.

The Canary Islands are made up of eight inhabited islands and five uninhabited islands and each one of them is different in both geography and the nature of its tourism.  For example, party animals head for the sizzling beaches of Tenerife and arguably the hottest nightlife in the Canaries, with the main resorts catering for the younger tourist.  Dominated by huge, purpose-built resorts, Gran Canaria has a similar reputation.  Lanzarote on the other hand is a late developer in the tourism business, and has been successful in embracing tourism and nature with a much more laid back feel.

Lanzarote is the most north easterly island of the seven main Canary Islands (the eighth inhabited island, La Graciosa, is just to the north) on a latitude of 29º North, the same latitude as Florida and the western Sahara, with an area of 846km².  Along with the other Canary Islands, Lanzarote is Spanish territory - part of Spain.  The region has its own autonomous government and is also divided into two Spanish Provinces.  Lanzarote is in the Province of Las Palmas (de Gran Canaria), which is made up of Gran Canaria, Fuerteventura and Lanzarote (including La Graciosa).  The other Province is Santa Cruz (de Tenerife), which includes the islands of Tenerife, La Palma, La Gomera and El Hierro. 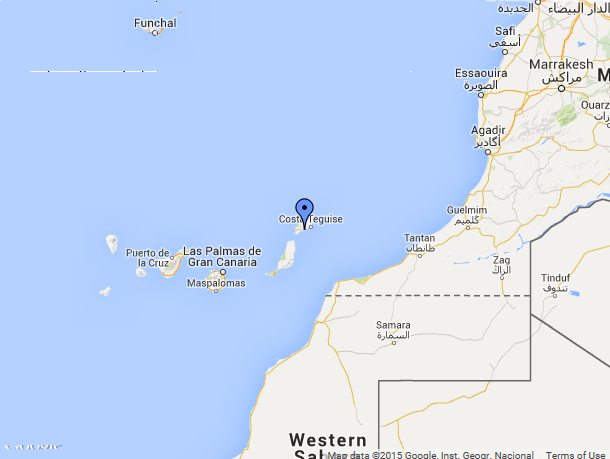 Though just 100 kilometres from the west coast of Africa, Lanzarote is no desert island.  The unusual landscape is largely a result of volcanic eruptions in the 1730s, and today Lanzarote's Fire Mountain in the Timanfaya National Park is an attraction that shows that the volcano is not quite dead!

Most of the buildings on the island, even modern ones, are white painted and low low-rise, an architecture largely dictated by César Manrique when he was given the task of shaping Lanzarote's future as a tourist island in the 1960s and 1970s.  Even the natural caverns at Jameos del Agua have been turned by Manrique into one of the island's most intriguing sights.  ....things to do, places to see. 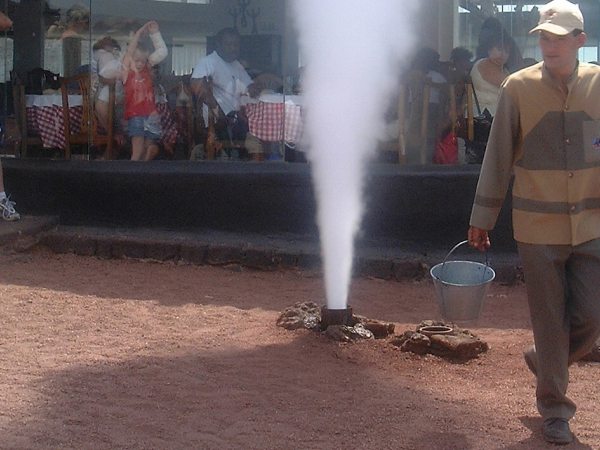 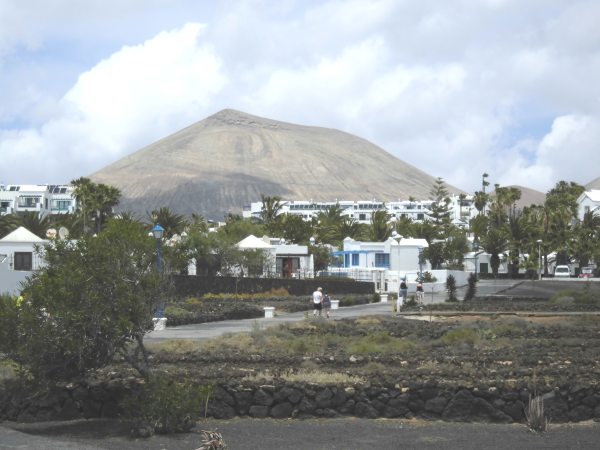 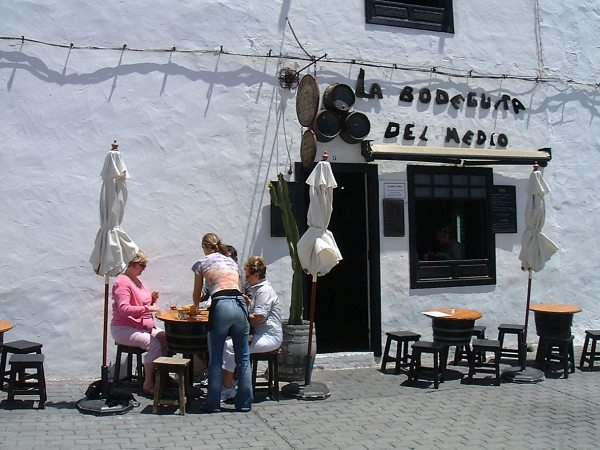 The island enjoys an average of over 8 hours sunshine every day with average maximum air temperatures of over 24ºC all year round.  The sea temperature varies from around 17-18ºC in the winter to 23-24ºC in the summer.

Most of Lanzarote's resorts are on the south facing coast, sheltered from the predominant north easterly and north westerly trade winds.  Even so, the mild breezes experienced by most of the island can be quite welcome in Lanzarote's 29ºC mid summer temperatures.

The coolest months are December and January.  Although there is little overall rain, there can be short but heavy downpours in winter along with winter clouds.

The temperature rises from January onwards, peaking in August and September.  The sky is mostly cloud free from May to September. 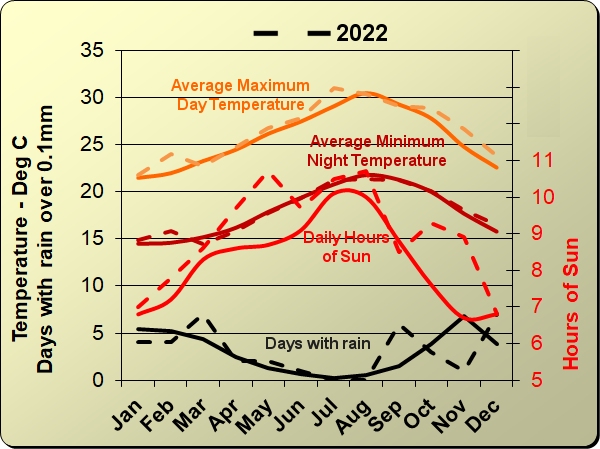 from the United Kingdom Hydrographic Office

5 day forecast from the BBC

Although part of Spain and the European Union, the Canary Islands have some different rules with regard to taxes and duty.  Lanzarote is "Duty Free", so goods bought on the island are treated as duty free purchases when brought into the UK or Ireland, unlike goods bought in the main Spanish peninsula or other parts of Europe.

You need a passport to enter Lanzarote.  If you are from Europe then this only needs to be valid for the duration of your stay.

The Spanish currency is the Euro.  Banking hours are normally 8.30 am to 2.00 pm, Monday to Friday although there is some Saturday morning opening.  There are numerous ATMs (cash machines) on the island.  You can generally use ATMs to withdraw money from your own UK or Irish bank but remember that you will normally be charged to withdraw cash using a credit card, just as you are charged to withdraw cash using a credit card at home.  If you use a debit card to withdraw cash (directly from your bank account) the charges will depend on your bank. Some UK banks charge nothing to withdraw cash abroad, others do.  Also, be aware that if you use an independent ATM (i.e. not belonging to a Spanish bank, for example Euronet) you might also have to pay a fee to the ATM owner.

The national language is Spanish, with a local dialect similar to that of South America.

Spanish shops tend to open in the morning and early afternoon, and then close until late afternoon, opening until late evening.   This is true of most shops in Arrecife, Lanzarote's capital.  However, many shops catering for tourists stay open during the afternoon.

Driving: Drive on the right and take care.  Lanzarote was well known for a high rate of accidents, although there have been many major road improvements in recent years, most of which are designed to reduce the number of accidents.  If you have not hired a car from the airport, there are car rental offices in Matagorda shopping centre, as well as at various places in Puerto del Carmen.

Seatbelts are compulsory for all.  The speed limit in towns is normally 60 kmph and 90 or 100 kmph on the major roads.  The use of mobile phones when driving is forbidden, even when using a "hands free" earpiece.  Driving under the influence of alcohol is strictly illegal.  Drivers should carry their driving licence and rental documents.

Taxis are fairly cheap and are strictly controlled. A taxi available for hire shows a green light on the roof, and you can flag them down or use a rank.

Buses (known as guaguas - pronounced wahwahs) run regularly between the main towns and resorts.  Information on routes and timetables can be found on the InterCity Bus

website.  There is also a smartphone application, available via the website, with timetables and live bus stop information if your smartphone has data roaming enabled.  Buses run every twenty minutes to half an hour between Arrecife and Puerto del Carmen, calling on the edge of Matagorda near the Lanzarote Sol.

Mobile phones operate on the island using the same frequency bands as in the UK and Ireland.  If your UK mobile phone is enabled for international roaming without an international call bar you can use it in Lanzarote.  Simply dial the number including the 928 prefix for a Lanzarote land line.  To call a UK number dial 0044 or +44 and then the number that you would dial in the UK but without the leading zero.  The use of mobile phones while driving is forbidden, even when using a hands free earpiece.

If your phone is EU based then you will be able to use your phone in Lanzarote using the same package or at the same rates as when you are at home.  However, if you have a large or unlimited data package this might be capped when "roaming".  Check with your network provider.

The emergency telephone number is 112.

The UK Consulate is located on Gran Canaria at Las Palmas, but the consul visits Lanzarote four times a year.  You can, however, telephone on 928 262508 from inside Lanzarote, (+34 928 262508 from outside Spain), Fax: (+34) 928 267774.  Office hours are 8.30am to 13:30.  email: LAPAL-Consular@fco.gov.uk  The UK also has an Honorary Consul in Lanzarote, Susan Thain.  She is available to offer consular assistance to British Nationals by calling the Gran Canaria based consulate.  The British Embassy has a website at: https://www.gov.uk/government/world/spain

Home
Bookings
Comments and Reviews
Contact
The Villa
The Area
Lanzarote
Things to do, Places to see
Flights and Transfers
Car Rental
Is my booking safe?